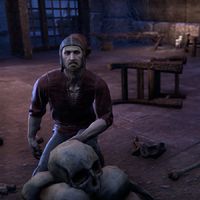 Pitro Fidenas is an Imperial prisoner found in the Imperial City Prison. He has been driven insane by Daedric torture and refuses to leave his cell until he's "found his face".

He is mentioned in the last entry of the Imperial Prison Discipline Records for complaining about his lost face. His pending punishment was summary execution, before you came along.

He can be reached once you have opened the prison cells.

"I can't find it. I've looked everywhere, and I can't find it anymore.
It has to be here!"
What are you looking for?
"My damned face! What do you think I'm looking for, you crazy bastard?"
What are you talking about?
"The Daedra made me stare. For days they made me stare.
I looked into a glass pool, full of smiles and the faces that went with them. A pool of a thousand faces. There were so many I lost track of my own."