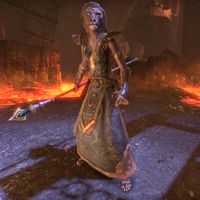 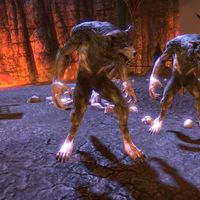 Nusana is a Khajiit werewolf found at the Blessed Crucible. She possesses flame spells even in werewolf form.

Unlike most other bosses, Nusana is not immune to crowd control effects. Use this to your advantage.

Firebolt
A basic ranged attack that does minor flame damage.
Rolling Fire
The boss releases a line of fire from itself dealing moderate flame damage to all players hit by it. This spell can be interrupted.
Transform
At low health, the boss will turn into a werewolf.

Soon Nusana and the rest of the Pack will take to the arena, as you have proven yourself to be worth fighting for a bit.

Dynus Aralas: "It looks as like there's some fight in our challengers, after all. Take them down!"
Snagg gro-Mashul: "Congratulations. You've passed the first trial."
Kayd at-Sal: "Yeah, they bested the finest sloths, drunkards, and fools we had to offer!"
Nusana: "Adorable. Shall we give them a pendant?"
<The Pack jumps into the arena.>
Dynus Aralas: "I say, let's see how these soft skins fair against a real challenge!"
Snagg gro-Mashul: "To arms!"

This Elder Scrolls Online-related article is a stub. You can help by expanding it.
Retrieved from "https://en.uesp.net/w/index.php?title=Online:Nusana&oldid=2285105"
Categories:
Hidden categories: