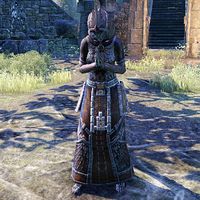 Naheesh Oleen-Ta is an Argonian elder of the Su-Zahleel tribe who can be found in the Ruins of Mazzatun. She was captured, alongside most of her tribe, by the hostile Xit-Xaht to be sacrificed to their Hist-Tree.

Once she is released from her cage:

However, if you press the wrong switch she will be drenched in amber plasm, go mad, and attack you with her claws.

There is one Achievement associated with this NPC: