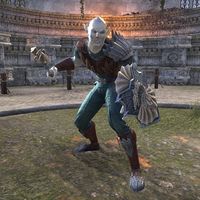 Konnugil the Leviathan is a Maormer member of the Storm Sharks attacking Sunhold. He provides the group event challenge for the dungeon. Initially, his weaker soldiers and a number of storm atronach bears and senche will be guarding prisoners, and once they are all defeated, he himself will drop down to fight.

During the group event, you will hear several NPCs talking. Some nobles are being interrogated by a Storm Shark Chanter.

Storm Shark Chanter: "You will tell me where the Kinlady is!"

After killing the first wave of Storm Sharks, a Wavepriest will call out.

After the next wave of enemies is defeated, a Storm Shark Windcaller will call for your defeat.

After the third wave is defeated, Konnugil himself will leap down from his perch to face you.

There are one achievement associated with this NPC:

This Online-related article is a stub. You can help by expanding it.
Retrieved from "https://en.uesp.net/w/index.php?title=Online:Konnugil_the_Leviathan&oldid=2200625"
Categories:
Hidden categories: