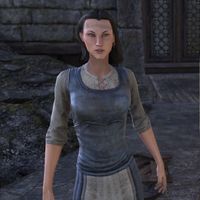 Jena Colus is an Imperial found in the city of Cheydinhal.

"Have you seen Brielus? Is he still setting up that stupid tent? He thinks our house is about to fall down, but I'll chance it. I'm not sleeping in a tent." When you first speak to Jena, she will ask you a question.

"You looking for someone in particular?"
I think this note is about you.
"Ha! Nice of Marcellus to let me know he found me. Lucky for me, I've made enough in Cheydinhal to disappear again. Here, take this for your trouble. And remember, you never saw me."

Once you have informed her about the note, you can ask what Marcellus wanted with her.

"Plenty of salvage in a town like this; think I'll stick around for a while longer. That dead messenger will slow Marcellus down."
What does Marcellus want?
"My head on a sharp stick. He's a violent, vindictive thug, and those are his good qualities. I got into debt with him, which is a bad place to be. Rather than pay up, I ran. Not far enough, apparently."
What are you going to do now?
"Like I said, I think I have a little time. I'll scavenge what I can here, then run again. Not sure where, but I wouldn't tell you if I was. Just keep moving away from the Imperial City, I guess.

After completing the quest Congratulations!, you have the additional option to ask her about her husband.

What about your husband?
"Brielus can rot here for all I care. I met him when I came here, made the mistake of marrying him, and now I'm going to dump him like the trash he is. I know all about that tramp Apphia.
Maybe I'll stab him on my way out of town. Serve him right."