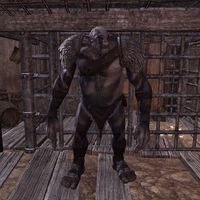 Jawsnap is an Ogre fought in the Summoner Arena of the Thizzrini Arena. Jeelus will introduce them as "Facing off against the Beast from the East! The Ladykiller! The Heartbreaker! The one, the only... Jawsnap!" when they arrive through a portal.

After Jawsnap is defeated, Jeelus will say "And Jawsnap goes down! The Mysterious Stranger goes on to Round Two!"

This Elder Scrolls Online-related article is a stub. You can help by expanding it.
Retrieved from "https://en.uesp.net/w/index.php?title=Online:Jawsnap&oldid=2022994"
Categories:
Hidden categories: