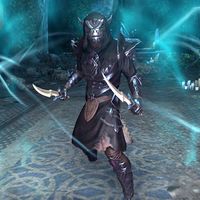 Dixulti the Moldering is an Argonian necromancer attempting to access the tomb of the dragon priest Morokei inside Labyrinthian. He aims to absorb Morokei's power.

At the beginning of the battle he stops his ritual and places a necromantic ward over himself, making him invulnerable. You must defeat the enemies he summons to drop the ward. There are two waves of enemies you must defeat to accomplish this. The first group consists of a Draugr Archer and Draugr Savage, which he summons when his shield first goes up. The second group contains a Draugr Icereaver and Draugr Charger, which he summons when the first two Draugr are dead.

Abyss
Deals major magic damage when you get too close to Morokei.[verification needed — see talk page]
Crypt Slash
Deals average physical damage with daggers.
Heinous Flurry
Deals average physical damage with daggers.
Skeletal Cyclone
Dixulti sets down several small, bony totems which deal low physical damage when you stand near them.
Skeletal Cyclone Burst
The totems explode, dealing moderate magic damage.
Grasping Void
A ghastly hand reaches out from the ground, grabs you, then throws you down, dealing moderate physical damage.
Closed Fist
The enemy casts a rune on the ground that activates after a while, rooting players who step in it. This attack does no damage and can be simply avoided. The root can be escaped by roll dodging. This attack can be interrupted to set the enemy off balance.
Necrotic Barrage
Dixulti throws magic at you, dealing average poison damage.

When you approach him, he yells at you.

Dixulti the Moldering: "I grow tired of killing those who stand in my way! You will not stop me from taking the Dragon Priest's power!"