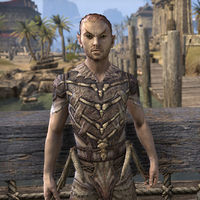 Deregor is an inspiring Wood Elf who is found in Saintsport. He is Crafty Lerisa's first mate, and has been captured by the Sea Drakes. He later joins The Spearhead along with his captain. He shows great respect for his captain and thinks highly of her.

After speaking to Lerisa, she'll send you to find her first mate. He'll be in the Bloody Witch storeroom.

"Who in Oblivion are you?"

or He will alternatively say a different line if you pick up the quest from Lerisa first:

"I'm not telling you anything, scum! What have you done with Captain Lerisa?"
Actually, Lerisa sent me to rescue you.
"Yeah? Ha! I knew she got away! Helane said she was being keelhauled and beaten, but I knew better. They don't call my captain crafty for nothing.
Get me out of these ropes and let's get out of here!"
Hold still.

As he flees the room he'll say:

On the beach, he'll say:

"I thought we were all dead. You and the captain got us out, but it was damn close."

Once aboard The Spearhead, he'll say:

"Wherever Captain Lerisa goes, I go. Even on this tub. Can't wait until we get our own ship again."

Once you arrive on Betnikh, you'll find Deregor at Ograt's Murder Market where he'll complain:

"I lost my best daggers when the Maiden's Breath ran aground. I'm going to pick up something new, but the question is what?
Do I need a new dagger or a trusty mace? Depends on what we're killing, I suppose."

If you decided to destroy the relic at Carzog's Demise, Deregor will say:

"Was destroying that artifact really the right thing to do? The captain doesn't think so. Still, I'm glad I didn't have to make that decision."

"Well now, a familiar face. How good to see you. Honestly, I'm beginning to wonder if I'm on the wrong ship."

"Well now, a familiar face. How good to see you. Honestly, I'm beginning to wonder if I'm on the wrong ship."
What do you mean?
"The war. I have no love for High Elves, but I hope to take a berth elsewhere soon. As soon as Lerisa has gathered enough money to repair the Maiden's Breath, we will do just that."

He can be found in the Frozen Palms Tavern along with his captain.

"My friend! How good to see you here. Have a drink with us! Help us celebrate!
Telonil worked his magic. We have our own ship. We're a crew again. Soon, we'll be back on the sea."

This Elder Scrolls Online-related article is a stub. You can help by expanding it.
Retrieved from "https://en.uesp.net/w/index.php?title=Online:Deregor&oldid=2489831"
Categories:
Hidden categories: