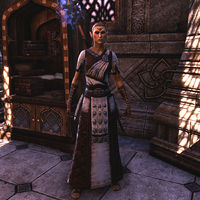 Atildel is an Altmer Star-Gazer who can be found inside Sanctum Ophidia. When you have completed The Missing Guardian, she can also be found in the Star-Gazers' Observatory in Belkarth, where she will ask your help to deal with The Serpent.

You can talk with her inside Star-Gazers' Observatory, where she will be looking for help.

"We found him—we found him, and we'll need help. He slew so many of us."
Who did? What are you talking about?
"I was part of a scouting force sent to survey the Scaled Court. To see if there was any kind of trouble we could stir for them in the highlands. We found the Celestial Serpent instead."
What happened?
"He had an army of Scaled Court with him in those caves. They killed so many of us."
I'll deal with this. Where do I go?
"There are Scaled Court in the mountains, in a cavern the Serpent cultists called "Sanctum Ophidia." I'll meet you there—a group of Gazers remains, but they'll need help. The Serpent means to kill us all. Man or Mer. He doesn't give a damn."

What is the Celestial Serpent?

"A powerful being; ancient. With power drawn from the stars above. Beyond that, even the Star-Gazers don't know, though there are certainly options. Only thing that matters is that his magical power is immense, and he means to slay us. All of us."

If there's a group still in the Sanctum, why are you here?

"I didn't desert them, if that's what you're implying. I came to find help. But the Star-Gazers are dealing with the Scaled Court in the entirety of Craglorn. There's no one left to handle this."

When you enter the Sanctum Ophidia, you may overhear her talking to Scaevola Calvisius, a captured member of the Scaled Court.

Atildel: "Shut up or I will shut you up!"
Scaevola Calvisius: "The Serpent will reclaim this land! Render mortal cities to dust! Devour your glittering towers in primeval growth!"
Atildel: "To Oblivion with the lot of you, and your damned Serpent."

If you talk with her after starting the quest.

"If you can stop the Serpent ….
I suppose there's no use getting my hopes up."

However, if she is spoken with at the entrance after completing the trial, she will instead say:

"The Scaled Court tore us to pieces."

Once you have defeated the Serpent, Atildel will arrive with Turuk in tow.

Turuk Redclaws: "By the Moons! What happened here?"
Atildel: "The Apex Stone! It's sealed the Serpent away!"

You can talk with her to complete the quest.

"Finally, the Serpent defeated. He killed so many of the others, wrought such destruction on this region … I didn't think I would live to see it happen."
What now?
"The battle against the Scaled Court will continue, but this was the one place in Craglorn the Serpent could be contained. You accomplished wonders today.
Turuk wanted me to give this to you. Don't worry—it's not diseased. I think."

After you complete the quest, Turuk and Atildel will take a closer look at the Apex Stone.

This Online-related article is a stub. You can help by expanding it.
Retrieved from "https://en.uesp.net/w/index.php?title=Online:Atildel&oldid=1950143"
Categories:
Hidden categories: