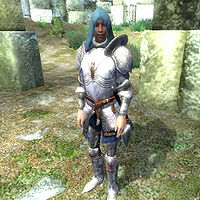 Thalfin, a Bosmer battlemage, is a Magician of the Mages Guild. She is the head of a contingent of Battlemages sent to ambush Falcar once he surfaces from the ruins of Silorn. She only appears during the related quest.

Once the related quest is active, she will travel to the exterior of Silorn and will then patiently wait for you to arrive. After you have talked to her and given out your orders, she will dutifully carry them out and travel to one of two locations.

She is clad in Steel Armor: a cuirass, greaves and boots. Instead of a helmet, she wears the standard mage's hood. Her only other possession is a meager amount of gold. In combat, she relies on a fine steel war axe and on a special set of spells: three Destruction, one Alteration, one Mysticism and one Restoration.

Once you arrive at Silorn, the two other Battlemages, Iver and Merete will point you towards Thalfin with the words: "If you're here to help, you'd better talk to Thalfin." and "Thalfin's in charge. She's been waiting for you." When you approach Thalfin, she will fill you in on the situation: "You're here from the Council, aren't you? Traven sent you? Just you? That helps the odds, but not much. We're still going to be outnumbered. Follow me; I'll show you what we're up against." She will then move a bit closer to the Silorn entrance. Once there, she will turn around and continue: "This is it. The entrance to Silorn is just ahead. We've been watching the site for a while, and have tried to stay out of sight ever since the original plan was blown. We were supposed to storm the place and take this gem they're holding. Only we can't. There's some sort of enchantment on the door. With that door sealed, there's no way we're getting inside, so we'll have to wait for them to come out. Based on the activity I've seen, that should be very soon." If you ask her for the reasons to retreat, she will say: "What other choice did I have? We were too exposed, standing around outside the door. I lost one of my men already, and I wasn't willing to lose more. Rolis tried to make it through the door - he's the one that realized this wasn't going to work. One of their patrols spotted us, and Rolis went down. So we're stuck. All we can do is wait for them to come out. Then they can't hide any more than we can, and it evens the odds quite a bit."

On the current situation, she will task you: "All we can do is prepare for them to come out. Once they do, it'll be our best chance to get the drop on them. Of course, since we can't get inside, we don't know how strong their numbers are, or whether we really have a chance at this. Traven sent word that he wanted you in charge, so you've got it. You're in command. Tell us where you want us If I may, I'd suggest that you put us in the best possible positions based on our abilities. But it's up to you." If you exit conversation and approach her again she will repeat: "You're in charge. Let us know what positions we should take up, but be quick about it. The Necromancers could come out of there any time now." When asked about her own abilities, Thalfin will be quite honest with you: "I have to admit, I'm better with an axe than I am with Magic. I've been working on spellcasting, but I still feel better with a weapon in hand." When asked about positions she will elaborate on your task: "There are two good locations to hide; one near here, and one closer to the door. Where do you want me to wait?" If you cannot decide yet she will say: "Okay, I'll just wait here until you tell me what to do." No matter where you ask her to go, Thalfin will say: "Okay, I'll head over there now. Let me know when everyone else is ready." When asked later on, Thalfin will say: "All right. I'm ready; keep your eyes peeled. They could come out at any moment. And don't move until you have to. We don't want to lose our advantage." If you fail to kill Falcar outside, an angry Talfin will say: "Get the gem! The leader probably had it - that High Elf." When you have received the Colossal Black Soul Gem, Thalfin will order you to return to Hannibal Traven right away: "You've got the gem? Get it back to Traven immediately, or else this whole attack was a waste!"