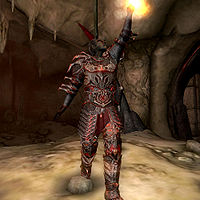 Ranyu is a Dremora torturer found in The Forbidden Grotto of Mankar Camoran's Paradise. He works under Orthe and will attack the player on sight.

Ranyu wears Dremora Kynreeve boots, greaves, and cuirass. He wields a Dremora Longsword in combat. He also carries a leveled potion. He has a leveled Resist Magic ability, and can cast major and minor Destruction spells, major Alteration spells and a Daedric Summon spell. He constantly patrols Orthe's section of the cave, and will attack Eldamil along with his fellow Dremora when he causes a distraction for the player.