Locating the Shrine of Mephala[edit]

Mephala's Shrine is located in the Great Forest, east of the Silver Road, halfway between where it meets the Orange and Red Ring Roads.

The location of this Shrine can be marked on your map by:

You need to be at least level 15 to start this quest. Talk to the Dunmer there, Dredena Hlavel. Request an audience and she will tell you to make an offering of nightshade between midnight and dawn; places where it can be found are detailed on the Nightshade article. Once you have some nightshade activate the shrine. Mephala wants you to go to Bleaker's Way and kill the leaders of the two prominent families there. Her exact dialogue is:

Call me 'Webspinner'. Pluck but a single thread, and the weave unravels. In Bleaker's Way, two families, Nord and Dunmer, live in perfect harmony. But beneath the surface lurks the secret seed of strife. Kill the leaders of the two families. Plant evidence to implicate the other family as the killer. And don't get caught. Be cunning. Don't spoil my scheme. And don't die... that would spoil everything. Ha-ha-ha-hah!

The leaders are Hrol Ulfgar and Nivan Dalvilu. After killing them you are supposed to plant evidence making it look like the other family was responsible for the murder. 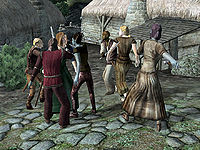 When you first get to Bleaker's Way, you need to find the fake evidence. Inside Nivan Dalvilu's house you will find a Dalvilu Cermonial Dagger [sic], located on a low table to the right of the entrance; this dagger should be planted on Hrol Ulfgar's body after you've killed him. In Hrol Ulfgar's house you will find the Ulfgar Family Ring, located next to a Guide to Leyawiin on a table near the base of the attic stairs; the ring should be planted on Nivan Dalvilu's body also after you've killed him. Wait in their houses until they come home, and kill them. Plant the evidence listed above. Before returning to Mephala's shrine, talk to any of the Dalvilu or Ulfgar family members about Hrol Ulfgar or Nivan Dalvilu to plant the seeds of animosity. Once that is done, the families will openly attack each other until one of the families has been destroyed.

Return to the shrine to receive the Ebony Blade, a one-handed blade with Silence and Absorb Health enchantments. Mephala will congratulate you:

Well done, little webspinner. Is there a prettier sight than friends at war? Take pleasure in the strife you have caused, mortal. Savor the divine essence of a well-spun plot. And here's a little needle to help you stitch your own tangled tapestries.