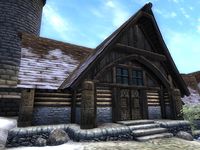 On the first floor is a dining room directly across from the entrance, with a food storage room in the north end of the house and a sitting room in the south end. In the food storage room, the east end holds three food barrels and a food cupboard, as well as a wine rack that holds three bottles of Surilie Brothers Wine, two bottles of cheap wine, and a bottle of Tamika's West Weald Wine. The west end of the room holds another food barrel as well as a drinks cupboard. The table on the south wall holds a retort and a cheese wedge, while the one on the west wall holds two carrots, two ears of corn, a loaf of bread, and another cheese wedge. The table in the dining room, directly across from the front door, holds two bunches of grapes, and another sits on top of the bookshelf which also holds a clutter chest. Another clutter chest sits on top of a chest of drawers. The sitting room at the south end of the first floor holds a chest of drawers that contains clutter, a clutter chest on the bookshelf, and a set of stairs on the west wall leading up to the second floor.

An unused bedroom lies on the south end of the second floor. An armor and weapon chest sits at the foot of a single bed; the bed is owned by Tolgan though he never uses it nor does he even visit the house. The bookshelf holds burgundy linens, a quilted doublet, quilted shoes, and a fine steel mace. A chainmail cuirass lies on the floor. The table holds an apple and a loaf of bread, and the small alcove in the west end holds a clutter chest and a clothing chest of drawers. Lyra's bedroom is on the north end of the second floor and holds a gold and jewelry chest, a clothing cupboard, a clutter chest, and a chest of drawers that also contains clutter. Four strawberries and a charm scroll sit on the desk, a green silk garment on the cupboard, a blue velvet outfit on the chest of drawers, and a small jewelry chest sits on the floor behind the head of the bed.