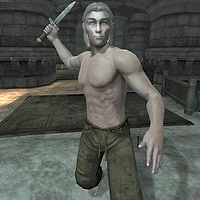 Lord Lovidicus is an Imperial noble and the vampire father of the Gray Prince. You will confront and kill him during the Gray Prince's mission to unlock his past. He does not exist in the game prior to the related quest, when he will emerge in Crowhaven, a fort northwest of Anvil.

After having walked Tamriel as a vampire for 200 years, Lord Lovidicus fell in love with his Orc Servant, Luktuv, and the unusual couple were soon blessed by the Nine when Luktuv became pregnant. After having kept his vampirism a secret for too long, Lovidicus finally decided to tell his beloved Luktuv the truth, which led to her imprisoning him in Crowhaven and run away with their unborn child. Having spent many decades in the depths of the fort, without feeding, Lord Lovidicus will wander around in a state of insanity in the southern part of the first zone, all day and night, without ever eating or sleeping, despite the presence of an upper-class bed and plenty of food. He is so eager to feed that he will attack you on sight, so be prepared.

He is equipped with a dagger made of the best material you can get at your level and an additional iron dagger. He wears a pair of sack cloth pants and a leveled piece of jewelry. He also carries a considerable amount of gold. As a vampire, Lovidicus possesses all the relevant abilities.

It is possible to yield to Lord Lovidicus but the respite is short-lived. He will say "Release! Sweet Release! After all these years, these decades, I am finally free! And you! So... so fresh! I must feed! I must feed! Agghhhhh!" and resume combat. He also has unique combat dialogue, saying: "So hungry! Aggghhh!", "I have not eaten in decades... YOU will be my feast! Rrragh!", and "Food!".