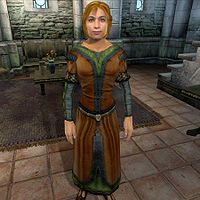 Jena lives a quiet existence in the big city and spends almost all of her time hanging out with the other clan members, especially her sister Jastia. She sleeps on the second floor of Jastia's house every night between midnight and 6am. After waking up she heads downstairs and wanders around on the ground floor. On Morndas, Middas, and Fredas she will keep doing so all afternoon until her two-hour dinner at 6pm. On Tirdas, Turdas, and Loredas she will venture outside at 10am and wander around the center of the Elven Gardens District until she returns home at 5pm. At 8pm, on all days but Sundas, Jena leaves the house and strolls around the District until she returns home at 11pm for an hour of relaxation before her bedtime at midnight. On Sundas, Jena wakes up as usual at 6am and spends the first three hours on the ground floor. At 9pm, she heads to the house of Sintav Clan leader Iniel, where she meets up with the entire family. They spend twelve hours together, and at 11am, when Iniel leaves for his usual lunch at the King and Queen Tavern, the entire family will follow him and watch over him while he eats. At 9pm, Jena takes a two-hour stroll around the District before returning home at 11pm as usual.

As a commoner, she wears only middle-class attire, a russet felt outfit and quilted shoes. She carries her house key and a small amount of gold.

When you approach her for the first time, she will politely introduce herself: "Jena Sintav. I have a house with Jastia, my sister." When asked about the Imperial City, she will tell you a bit about the Sintav clan: "The Sintav clan is very close. We watch out for each other, and Uncle Iniel, he knows everything, and takes care of us."