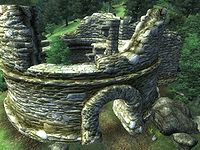 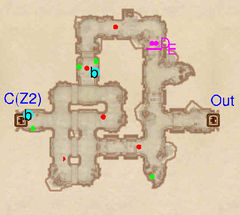 Upon entering, the best option is heading north. It is possible you may be detected by an enemy to the south, and there is a chance the fighting will bring in the other enemies in this fairly small zone. In any case, head north and take care to avoid the tripwire (E) attached to the two Swinging Maces at D. These can be turned to your advantage while fighting the enemy around the corner. 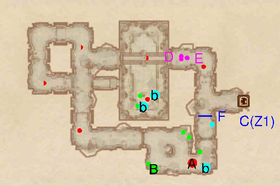 As your way south is blocked by the gate at F, head north and dispatch the Marauder there. There is pressure plate at E triggering two Swinging Maces at D, which can be used against the enemy potentially waiting for you on the bridge in the next room. If you manage to remain undetected, it is possible to snipe from the bridge to dispatch the Marauder below.

Hop down to access a minor loot chest and two bedrolls (b). Make your way back up in a loop, potentially fighting up to two enemies on the way, and then head south. After cutting your way through another Marauder, you'll arrive at the final room, where the boss-level Marauder (A) is guarding a boss chest (B), 3 minor loot chests and a bedroll (b). Don't miss the Battered Crate, hidden behind a barrel and broken crate in the north-eastern corner, containing 8 skooma potions and some gold. Push on, loot the minor loot chest nearby and activate the lever (cyan dot on map) which opens the gate at F.