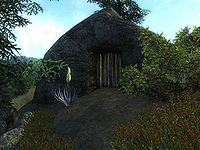 Bleak Mine is a small silver mine north of Anvil containing NPCs (quest-related). It contains only one zone, Bleak Mine. 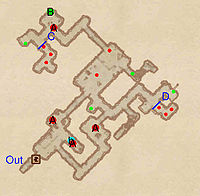 Your main objective is to free Malacath's ogres from slavery; there are six imprisoned ogres, divided into two cells, three ogres in each. It is most likely that the patrolling guards will detect and attack you, unless you have a very high Sneak skill. Note that when you free the ogres, they will help you dispose of the guards.

Upon entering from door Out, you are immediately confronted with one or two Bleak Mine Guards and their Captain at A, so be prepared. All the guards here carry the key to the northwestern cell door at C, but it is possible to avoid them by sneaking into the first tunnel to the right and, if you did not encounter him in the first room, fight or avoid another Guard at A. If you want the keys to both cells, take a left at the first intersection and claim them from the two lower-leveled Guards in the big central room. Locate the rusty cell door at D, free the first three ogres and watch them run towards the remaining guards. Loot the chest near the cell, make your way to the other cell at C and free the last ogres. While the ogres fight the guards, pry open the boss-leveled chest at B, claim the contents from the two remaining minor loot chests (green dots on map), then exit the mine the same way you came.