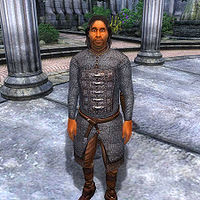 Adrian Decanius in the Arboretum

Adrian Decanius is an Imperial commoner. He can be found most often at his home in the Imperial City's Elven Gardens District.

Adrian has a very simple schedule. He can be found in his home from 9pm to 9am, sleeping from 10pm to 5am. At 9am, he leaves for the Arboretum and stays there until he returns home to eat dinner at 6pm. At 8pm, he will leave his house once more, but will only make it to about halfway to the Arboretum before heading back home at 9pm. During the Light the Dragonfires quest, he and all other Imperial City residents are confined to their homes.

Adrian wears middle-class clothing consisting of a quilted doublet, tan linens, and a pair of doeskin shoes. For protection, he wears a chainmail cuirass. He is armed with an iron mace and an iron dagger but carries little else, apart from his house key and some gold.