In the Sewers during Recover the Amulet, a large trap door can be seen as you first advance. After killing the Mythic Dawn on top, you can activate it to enter the Lower Sewers.

Upon entering the Lower Sewers the Champion will find a fresh skeleton with a bloodied note. The note refers to a Troll King and the Champion suspects coin and other loot will accompany him.

The lower sewers is a 3 level maze with a number of Trolls and Chests. You enter each level via a small trap door. It is not necessary to kill any Trolls, except the Troll King. On the second level the Champion will mention an "overpowering" smell when he finds the trap door to the third level.

The Troll King can be found on the third level. He appears as any other Troll, but is much stronger. He attacks from a fixed position and doesn't follow you. Once he is defeated, you will receive (?) and will be immediately returned to the Sewers. 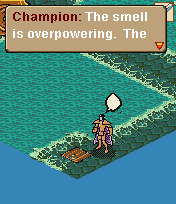