After rescuing Martin form Kvatch, Jauffre will inform the Champion that Mythic Dawn Cultists have stolen the Amulet of Kings and retreated into the Sewers beneath Bruma. You can enter the Sewers by a nearby trap door to the North of town.

The Sewers is a short linear level with several Mythic Dawn Agents and small trap door at the end leading to the Cave. Two mythic dawn agents - an archer and swordsman- stand guard over the trap door to the cave and must be defeated to advance.

There is also a large trap door hidden near the sewers entrance. It can be activated to start the Troll King side quest. 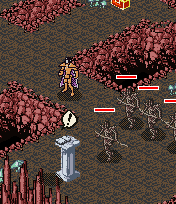 Camoran vanishes with the Amulet, leaving you to deal with his goons...

The Shrine can be found in the center of the Cave level. A number of Mythic Dawn Agents are scattered throughout. The Shrine can be easily recognized by the blue column and red NPC - Mankar Camoran - that reside within. Once you enter the Shrine, Camoran will alert his Agents and vanish with the Amulet.

Camoran has four agents the will attack you; with another 2 entering during the fight from the east. They are normal Mythic Dawn Agents and one repeatedly uses a poison spell.

A book can be seen atop the column in the Shrine. Once Camoran's agents are defeated you can activate the column from the rear to retrieve the Tome and automatically return to Jauffre and Martin in Bruma. Martin will offer to begin translating the Tome.