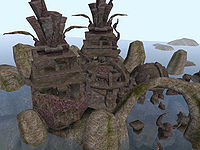 Outside, the shrine is guarded by three leveled Daedric enemies.

Inside, you will find three more leveled Daedric enemies, one Dunmer guard standing near the entrance, and the one other guard at the actual shrine. The ruby on the altar is cursed. The shrine to Mehrunes Dagon can be activated to start his quest. 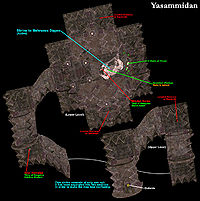