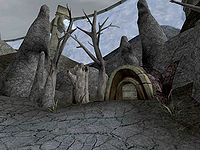 Salvel Ancestral Tomb is a medium-sized tomb just inside the northeastern corner of the Ghostfence, northeast of Odrosal.

Inside, you'll find a vampire by the name of Mastrius who, if you're a fellow vampire, will have a quest for you. He has a demon katana and nearly a full suit of ebony armor (minus the bracers and the helm).

There are five undead enemies found in the tomb. The loot includes a potion, a copy of The Doors of the Spirit, some ingredients (including a ruby found on top of a skull near one of the ashpits), two keys (to a door and to a chest), and a Telvanni dust adept helm.

There are no known members of the Salvel family. 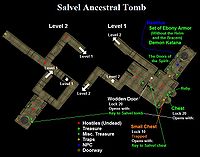