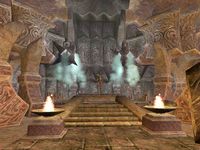 Magas Volar is a Daedric shrine that is not physically connected to any location in Morrowind, and is only accessible by means of a certain magic amulet.

This location can be accessed only by using the Daedric Sanctuary Amulet found in a Small Ornate Lockbox in Tel Fyr. Equipping the amulet will instantly transport you to this Daedric shrine, where you will be attacked by the powerful Dremora Lord Dregas Volar. He will be wielding the Daedric Crescent, a unique 2-handed long blade. After you defeat him, you will be instantly transported to Tel Fyr (even if that's not where you were before), with the Daedric Crescent in your inventory. The Daedric Sanctuary Amulet will disappear. 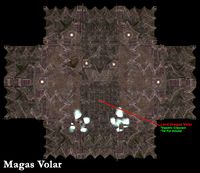