The UESPWiki – Your source for The Elder Scrolls since 1995
< Morrowind: Places: Temples
Jump to: navigation, search 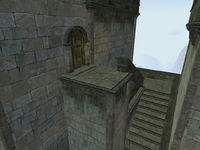 The Imperial Shrine at Wolverine Hall

The Imperial Shrine is an Imperial Cult shrine which can be found in the main tower of Wolverine Hall.

Inside of the shrine

This small branch of the Imperial Cult is located within Wolverine Hall, south of Sadrith Mora. It is on the middle floor between the Fighters Guild and the Mage's Guild. Aunius Autrus and Scelian Plebo offer a variety of services to all visitors. An Imperial Cult altar offers the usual blessings for a small price (free to Cult members above Novice rank). There are no quests associated with this shrine. This shrine is one of the locations where a Divine Intervention spell may take you.