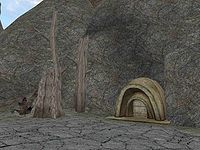 Dareleth Ancestral Tomb is a small tomb in the northeast Ashlands, west of Tel Vos.

Go to Tel Vos and head due west, past the dungeon entrance, the egg mine, and Nerano Ancestral Tomb. The Dareleth Ancestral Tomb is on the other side of the hills. There are four undead here. Loot consists of a few potions, a copy of Ancestors and the Dunmer, a few ingredients, and a key to a door inside the tomb.

There are no known living members of the Dareleth family.