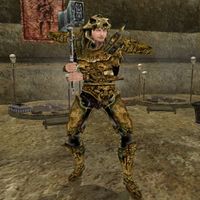 Crazy Batou is a Nord barbarian who can be found in the Maren Ancestral Tomb. True to his name, he is crazy, and will attack you relentlessly on sight.