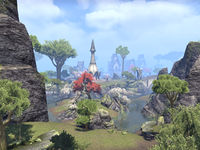 Silatar is a small island in the Abecean Sea, and is part of the Summerset Isles archipelago.

In the mid-Second Era the island was inhabited by an Altmer girl named Aranias, who was born with the power to control the earth, and her family. Seeking her parents' approval, the girl used powerful magic to create a fantastical and beautiful paradise on the island. Everything from the flowers to the island's manor radiated an almost palpable aura of magicka. However, Silatar's beauty feels wrong and unnatural to behold.[1]

Aranias became known as the Rock Witch of Silatar, and after she accidentally destroyed a passing ship with her powers, her parents departed the island circa 2E 582 to seek a trainer. While her parents were away, Bosmer bandits attacked Silatar and burned the farms, and Aranias was forced to drive them off alone. Her parents returned with High Kinlady Estre and the Veiled Heritance, who promised to help. However, Estre sought only to use Aranias as a weapon, and forced her to rip an innocent Bosmer to pieces as a demonstration of her loyalty. Aranias then departed the island to join the Heritance.[1]

It is unknown what happened to Silatar following Aranias' mantling as the Wilderqueen of Greenshade.[1]