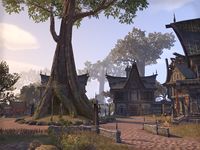 Greenhill (formerly called Thibault's Rest)[1] is a township found on the borderlands of Reaper's March, in the province of Valenwood. Greenhill is a traditional Colovian settlement that was built by the Legion cohort that settled in the march after the death of General Thibault of Kvatch.[1] It has since been a diverse community of Colovians descended from the cohort, and the local Bosmer and Khajiit of the march.

General Thibault of Kvatch and the Hastrel cohort descended from the Colovian West into the southern savanna, much like other incursions throughout the years. When the general died from unknown circumstances, his trusted cohort would inter him in a crypt not far from the Falinesti Autumn Site. They then settled not far north from it. The General's wife, Tertcia manipulated the local Wood Elves and Khajiit to put them against each other to build the crypt where he would be buried and the town they would live in. The town they built was Thibault's Rest, which later became Greenhill.[1]

At the center of town, they built a temple of the Divines with a traditional catacomb underneath, but as the local races moved in, they expanded them for themselves.[2] Sometime in the Second Era, a greenshaper came into town and used her magic to burrow roots and flora into the catacombs. At this point, the town is governed by a Treethane.[3] In 2E 582, the Legion of the West Weald, led by Javad Tharn and the Stonefire Cult launched an invasion over Reaper's March to annex the region into the Colovian Estates. The cult, under Balras Arenim, blackmailed a local Khajiit and had her place amplification crystals across town to possess the people and turn them into Dro-m'Athra.[4][5] However, the intervention of an adventurer had foiled their plans and liberated the town from their clutches.[6]