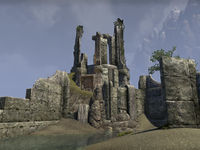 Erokii is an ancient ruin in Rivenspire, said to have once been the greatest Ayleid city in northwest Tamriel.[1] The great spire above Erokii, now known as the Doomcrag, has been likened to the Adamantine Tower in construction, and it has been speculated that it may, at one point, have been built as one of the Towers.[1] It housed the Light of Life, or Lattanya in Ayleidoon, a relic which helped plants grow and healed illnesses. Pilgrimages to the summit of the Doomcrag would often occur daily. Following a bloody conflict between the Ayleid settlers and the original inhabitants of the area, the relic was tainted, and became Abagandra, the Lightless Remnant, a beacon of death.[2]

A number of local legends surround Erokii and the Doomcrag, and these can be found in the tomes Dire Legends of the Doomcrag and Tears of Anurraame.

This Lore-related article is a stub. You can help by expanding it.
Retrieved from "https://en.uesp.net/w/index.php?title=Lore:Erokii&oldid=2571560"
Categories:
Hidden categories: