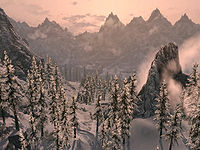 Dunmeth Pass (also called Dunmeth Path)[UOL 1] is the main pass and one of the few traversable roads leading through the Velothi Mountains, branching northeast Skyrim with northwest Morrowind. It historically served as a significant avenue of trade for the region.[1] The nearest settlement from the eastern side is the town of Cormar View, but the closest city is Blacklight, which is not very far from the pass anyway. From the western side is the large city of Windhelm and smaller settlements such as Lower Yorgrim. The Imperial Garrison that guards the Dunmeth Pass are headquartered in Windhelm.[2]

In the annals of the Merethic Era, Veloth the Pilgrim and his followers, the disenfranchised Chimer traveled through the mighty range of the Velothi Mountains until they came across the Dunmeth Pass. He and his followers pressed onward and saw a hawk fly overhead, determined to follow the bird to their new home. As they traveled further down the path, they came across an impenetrable wall of ice and snow, and out of the wall was an aspect of Boethiah, who demanded the Pilgrim to take an oath, one for the betterment of the mer. Veloth raised his hammer and proclaimed that his heart and soul now belong to the Chimer-people. Boethiah laid down the wall of ice and revealed the way to Morrowind.[3]

In the mid-Second Era, High Queen Mabjaarn Flame-Hair decided to fiercely protect trade routes to her city and she placed extra security to one of her most valuable trade routes, the Dunmeth Pass.[1] When the Third Empire had incorporated the province of Skyrim in the early years of the Tiber Wars, they placed an Imperial Garrison in Windhelm to protect the Dunmeth Pass from Morrowind.[2] Tiber Septim's invasion fleet had begun to gather en masse in eastern Skyrim and northeast Cyrodiil. They crossed the Dunmeth Pass and later gathered outside of Cormar View and Blacklight for their invasion of Morrowind.[4]

Many years ago, the local Nords had built an outpost outside the pass called the Refugees' Rest, which was a waypoint for travelers that made safe passage from the east. It was a meeting place for travelers to meet with loved ones on the other side, or leave a notice for those that did not survive. In 4E 20, the Jarls of Skyrim had decreed that the fort was named a monument for the struggle that refugees faced when they fled Morrowind in the Red Year.[5] It had fallen into disrepair by 4E 201.