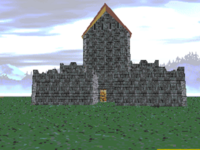 Castle Llugwych, headquarters of the Blades, as seen in Daggerfall

Castle Llugwych is a large fortress in the central part of Ykalon in the Iliac Bay region. It serves as the headquarters of the Blades in the region. Because of its sensitive function, the castle is well-guarded.[1]

At some point during the Agent's investigation circa 3E 405 - 3E 417, a follower of the Underking gave them a letter wishing to meet them. When the Agent met up with them, the follower explained that Mannimarco and his Worm Cult had stolen an item from the Underking, cursed it, and then gave it to the Blades. The Underking wished for no harm to fall on the Blades and so asked the Agent to enter Castle Llugwych and remove the cursed item.[2]