The UESPWiki – Your source for The Elder Scrolls since 1995
< Lore: Minerals: Crystals
Jump to: navigation, search 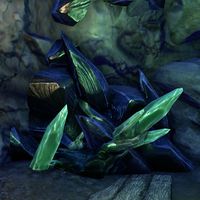 Aeonstone is a green stone that can be found throughout mines in southern Elsweyr. Though it has no intrinsic power, aeonstone has the unique capability to store and amplify magical energy.[1] In this state, the aeonstone becomes empowered and glows with a bright green hue. This unique property was discovered by the New Moon Cult, who would engage in ritualistic sacrifice to empower themselves and their masters. Many cultists used aeonstone in their armor.[2] These stones would then allow cultists to greatly empower their own sorcery with this magic, even allowing necromancers to resurrect and enslave Dragons.[3] Absorbing stored energy from aeonstone can be extremely dangerous for mortals, and improper usage can wreak havoc on the mage's body.[4]

During the Dragons' rampage through Elsweyr in 2E 582, the Order of the New Moon was revived in Southern Elsweyr by the Forgotten Mane Ra'khajin to serve the dragons Laatvulon and Kaalgrontiid. Cultists would sacrifice themselves en masse to empower huge chunks of aeonstone. These stones would then be used to empower Dragons and collected on the island of Dragonhold. Eventually, the island's massive collection of aeonstone was utilized by Kaalgrontiid in hopes of ascending to godhood and fulfilling the New Moon prophecy.[5] The aeonstone was also used to create a giant defensive ward around the island in order to prevent interference in his ascension.[4] The Dragonguard and Nahfahlaar defeated Kaalgrontiid before he could finish absorbing the energy from the aeonstone, but with the ritual suddenly disrupted, the unstable energy threatened to unleash an explosion large enough to wipe Tamriel off the face of Nirn.[4] Abnur Tharn would sacrifice himself to contain the explosion, though Dragonhold and its massive collection of aeonstone was destroyed in the process.[6]

This Lore-related article is a stub. You can help by expanding it.
Retrieved from "https://en.uesp.net/w/index.php?title=Lore:Aeonstone&oldid=2436728"
Categories:
Hidden categories: