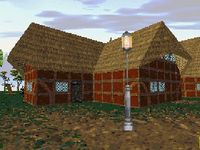 This home is infested with bears, or possibly tigers 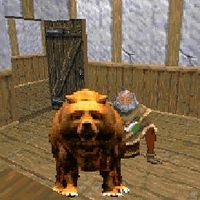 A grizzly bear and a terrified homeowner

"Every once in a while we get an idiot like this client. Some fool left his back door open and a wild animal got in. He seems rather confused as to whether it is a bear or a tiger, but in either case, it wanted to eat him. We need you to go and slay the animal. You [sic] standard fee is (random gold) gold. Want to take it (player's name)?"

"Gotcha. Let the tiger have him. The guy is a fool for letting it in in the first place, eh?"

This quest is very similar to the Wild Animal quest; the major difference being this one takes place in another town. Travel to the town where the client lives and learn the building's location by asking around. Enter the building and kill the beast, which will either be a grizzly bear or a sabertooth tiger. When the animal dies, a message appears:

The (animal) is dead.

Return to the guild after the beast has been killed, and the Fighter Quester will say:

"No great difficulties I trust? Thought not. Here's your (random gold) gold."

Either of the following: