Grab a Tiger by the Tail[edit] 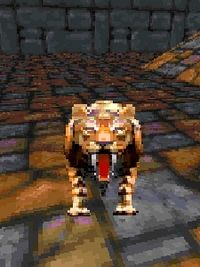 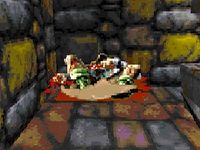 You may find a note on the tiger's victim

"(Player's name), isn't it? Just who I was looking for. We have a rather interesting job, requiring a bit of brains rather than brawn. Are you interested?"

"Here's the situation. Seems (noble's name) has this pet sabertooth tiger -- don't ask -- and it ran off a few days ago. (He/She) had it tracked to (dungeon), but now we need someone to go in there and bring it out. Alive. The trick is that it's been trained to respond to this bell. The tiger should become docile if you ring the bell in its face. Of course, (noble's name) did say it isn't trained too well -- are you surprised? -- so you may have to smack it upside the head once or twice to get its attention. Just don't kill it, OK? Bring it back to (noble's name) at (noble's residence) in one piece within (time limit) days, and (he/she)'ll pay you (random gold) gold. Good luck."

"Yeah, you're right, I did say this job needed brains didn't I?"

Head to the dungeon the Fighter Quester mentioned. The sabertooth tiger will be found at a quest location within, prowling about near a fresh corpse. You must ring the bell to tame the beast, however doing so too early results in a notification:

You ring the bell loudly, but it doesn't seem to have any effect.

Once you have found the tiger, you must hit it once without killing it. Then, go into your inventory and use the bell the Fighter Quester gave you. When you exit the menu screen, a notification appears:

The tiger's ears perk up at the sound of the bell. It shakes its great head from side to side, and begins emitting a low growling sound. Is it purring? The tiger pads over and rubs against your legs, nearly knocking you over.
The tiger is now following you.

As the notification says, the tiger is now a follower. Unlike with other followers, however, the tiger has no icon indicating this; the animal simply disappears from the game. If you kill the tiger without taming it, however, you receive a different message:

Oops. You killed the tiger. I wonder what (noble's name) will say? 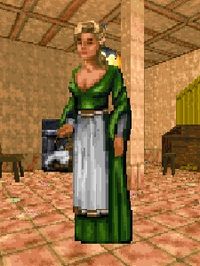 Next to where you find the tiger, there will be a dead body. There is a 50% chance that the body will contain a letter saying:

I am sorry I can't be with you today
in (lover's town), but I wanted to take a
moment to let you know that you are
in my thoughts as always, my sweet.
I am sitting here under a tree, on a
beautiful afternoon that reminds me
of you. Everything reminds me of you,
my darling, the shining sun in the sky,
the chirping birds in the trees, even
the pretty pet tiger walking with its
owner over there. Ha ha! The tiger has
gotten loose, the scamp. It is bounding
over my way. See how its coat gleams in
the sun, like your hair in the firelight.
Its owner is shouting something and ringing
a little bell, but it doesn't listen. Such
a high spirited beast! It seems friendly
enough, here it comes to say hello...

Return to the town in which you received the quest and ask around to learn the location of the lover's residence. Speak to the lover, who will say:

"Yes, what do you want? Oh...good gracious, a letter from (victim's name)! Why is it stained with blood? (He/She)'s dead? Dear me. (He/She) always was so sweet to me, I'm afraid (he/she) had the delusion that we were in love. Poor soul, what a tragic end. I certainly appreciate you telling me what happened. I'll make sure (his/her) family knows. Here, why don't you take this (magical item) (he/she) gave me. I certainly don't have any use for it." 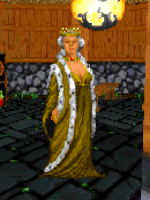 The owner of the tiger will be happy.

Travel to the town where the noble lives and ask around to learn their location. Enter the building and talk to the animal's owner with the tiger following you. The noble will say:

"Oh, (tiger's name), darling, you're safe! Thank you so much for bringing my baby back home to me. I'm sure he didn't give you any trouble, did he? He's just a big kitty cat at heart, wouldn't hurt a fly. Here's your (random gold) gold, just like I promised that nice (Fighter Quester's name) at the Fighter's Guild."

However, if you killed the beast it's owner won't be happy:

"You horrible horrible (player's race)! I can't believe you killed my poor innocent (tiger's name). Just a sweet lost kitty, and you just had to slaughter it. Get out of here at once, before I have you arrested for murder. Get out!"

Needless to say, you won't be paid in this instance.