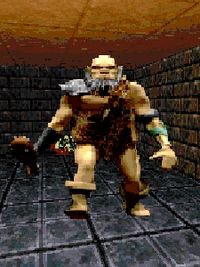 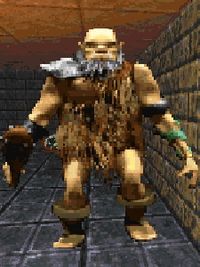 ...relentlessly, one after another... 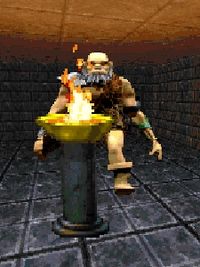 Speak to a Fighter Quester, and he says:

"Yeah, I got a little job for you. I wouldn't give this to just anyone, but I know you do good work. There's this pack of giants that want killing. Pay is pretty standard, (random gold) gold pieces. You up for it?"

"Awright, whatever. Sounded like your kind of thing is all."

Travel to the dungeon the Fighter Quester named. Once you enter, a group of giants will appear nearby. Hit one of the giants and it will say one of:

Once you have killed six giants, you will receive the following message:

All of the giants are dead.

More giants will appear if you stay in the area; you can either continue to kill them or leave the dungeon.

When you return to the Fighter Quester after killing six giants, he will say:

(Oath), them giants didn't know what hit 'em, did they, (player's first name)? Here's your (random gold) gold, as promised."

There is a 25% chance that he will also give you a random dungeon map, adding:

"Hey (player's guild rank), if it's killing you're looking for, take this map to (random dungeon). Plenty of it there."