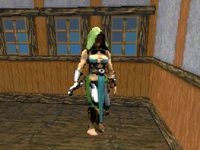 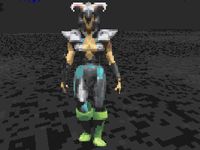 The noble will send barbarians after you if you decline to help... 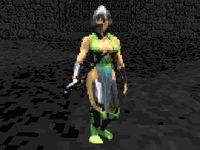 ...and you will also be pursued by archers if the noble dies 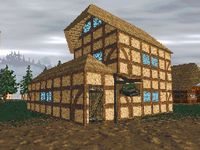 Hermaeus Mora's worshipper is fittingly found in a library

Upon a successful summoning, Hermaeus Mora appears and speaks to you:

"Power, yes, is an allusive but eloquent prosecution. One of my minions possesses an ancient tome called the Oghma Infinum, which bequeaths great power on those who read its pages. If you exterminate a certain scrofulous patrician who has aroused my displeasure, I will arrange a meeting between you and the book. Is this agreeable?"

"Very well. This socialite I referred to resides at the palace of (town). For the record, the name of your quarry is (noble's name). Kill (him/her) and proceed to (contact's town), where my servant (contact's name) will wait for you in a library. I do not think there is anything to be gained by continuing this interview. Fail me not in this, (player's first name), and the power thou craves will be thine."

"You answer negatively. Am I to understand that you sought power, but seek it for free? You ought to have sought wisdom instead, for that is what you need. I bid you a very disappointed goodbye."

Travel to the city named by the Daedra Prince and enter the palace. Find and attack the noble, who appears as a spellsword. When hit for the first time, your opponent says:

"No! Wait! I swear, I meant to pay Lord Mora back. Don't kill me, I beg of you! Here, spare my life and take this (magic item) back to him as a token of my goodwill and a down payment on what I owe. Please, will you?"

You have three options:

If you kill the noble, a message appears:

Hermaeus Mora will be pleased-- you have slain (noble's name).

Alternatively, you can accept the magical item but kill the noble anyway. Travel to Hermaeus Mora's worshipper, who will take the item from you and give you your reward as promised.

Regardless of your choice, head to your contact's town. Ask around and eventually you will be given their location, a local library. Enter the library and speak to Mora's worshipper to complete the quest.

If you accepted the noble's magic item, the worshipper will begin by saying:

If you spared the noble's life, the quest ends with no reward, only these words:

"You're telling me you let that little worm live, and you bring me this pathetic (magic item) instead of (noble's name)'s blood on your hands? Hermaeus Mora will be very unhappy with this news."

If you killed the noble, your contact will be pleased and say:

"(Player's first name), I underestimated you. I told Mora you couldn't do it, but here you are, and all (region) is in an uproar over (noble's name) death. As promised, the book. Remember: you can only read it once. See you later, maybe."

The Oghma Infinium will be found in your inventory.

If you ask an NPC about Hermaeus Mora, you may be told:

If you ask an NPC about your Mora-worshipping contact, they may say:

If you ask an NPC about the Oghma Infinium, you may hear: