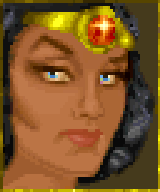 As seen in Daggerfall

Queen Barenziah is a Dark Elf noble and the Queen of Wayrest. Her husband is King Eadwyre, with whom she rules the kingdom jointly. She is the mother of Princess Morgiah and Prince Helseth, and stepmother of Princess Elysana.

Barenziah can be found in the throne room of Castle Wayrest, next to her husband. Those in good standing may be asked to perform some tasks for her.

The queen also offers an optional quest, which is part of the Main Quest series, if your character level and reputation with her are high enough.

This article, which is part of the Daggerfall Redesign Project, is a stub. You can help by expanding it.
Retrieved from "https://en.uesp.net/w/index.php?title=Daggerfall:Barenziah&oldid=2085414"
Category:
Hidden categories: