Note: this quest is entirely optional, and has no effect on the main quest or its outcomes. However, if you complete it successfully you will receive some additional information concerning the storm that wrecked your ship at the very beginning of the game.

"You're (player's name), yes? The one who was shipwrecked?"

"I thought so. That storm that destroyed your boat was no natural winter squall, but I guess you suspected as much. I will gladly tell you what I know about it, if you will find a particular rare scroll for me. This is not the type of job I could give to the Fighters Guild, for the scroll is protected by some powerful daedra spirits and has the power to summon creatures from the pale of Oblivion. Go to (dungeon), find the scroll, and bring it back to me before (time limit) days have passed and I will tell you what I know about the tempest that nearly destroyed you." 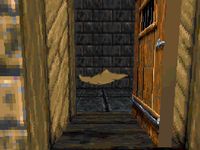 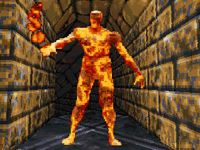 Don't read the scroll, unless you want to face a fire atronach

Head to the specified dungeon and find the scroll within. It will be guarded by a daedra, usually a Daedroth. Kill the guardian and pick up the scroll. You will receive a notification:

You have found the scroll (employer's name) wants.

If you doubt this, you can read it for yourself to verify the contents. The following incantation is written on the scroll:

Breathe candent smoke on the veil of Oblivion
And force the line dispelled
Awaken the sleepless, unquiet Princes
And bid Their standing servants rise
It is the night when frost will burn
When flame will freeze the lamplit lake
When clouds of bats devour clouds of birds
When boils and sores afflict the rich
When a boy with wings doth curse the land
If knowing lies fester on my tongue
And such whens are but whispers in the night
These words form a sentence of death
But if the Day of Oblivion is indeed at hand
Servants of the Dark, obey me

Beware, for reading the incantation has consequences:

A burst of fire flies from the scroll, creating a burning creature.

The creature is a fire atronach that immediately attacks you with its fiery touch. When hit, the conjured golem taunts you:

"You summoned me, (player's first name). And now you reject my embrace?"

Kill the monster and return the scroll to your employer to receive your reward.

Upon returning with the scroll your employer says:

"Ah, the Bothdorji Scroll. Very good. Now, let me tell you about the storm. You sailed an unmarked ship from the Imperial City, but your identity, your mission, and your patron are known to the perceptive. An unknown agent convinced the Mad Witch of the Wrothgarian Mountains, the grandmother of the present king of Daggerfall, that your ship carried the murderer of her son, the late King Lysandus. That is all that I can tell you."

You cannot keep the scroll if the time limit expires. Instead, a message pops up:

You smell a brief puff of rancid smoke and realize that the scroll that (employer's name) wanted has disappeared.

Without receiving the scroll in time your employer will not divulge any information, so you will miss out on your reward.

After you have accepted or failed the quest, NPCs may say when asked for any news: