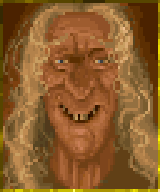 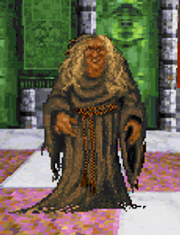 At her castle in the Wrothgarian Mountains

Nulfaga is a Redguard noble, mother of the late King Lysandus of Daggerfall, and grandmother of King Gothryd. As with Mynisera, her official title is Dowager Queen of Daggerfall.

Nulfaga is a renowned mystic and necromancer. As the kingdom prepared for the War of Betony, she foresaw her son's death though he refused to heed her warning. After Lysandus was murdered, Nulfaga descended into madness and retreated to Shedungent, her castle in the Wrothgarian Mountains.

Nulfaga is also responsible for conjuring the storm which left the Emperor's agent shipwrecked in Privateer's Hold, after an unknown figure led her to believe Lysandus' murderer was aboard the vessel.

This article, which is part of the Daggerfall Redesign Project, is a stub. You can help by expanding it.
Retrieved from "https://en.uesp.net/w/index.php?title=Daggerfall:Nulfaga&oldid=1822509"
Category:
Hidden categories: