Smuggle the weapon to another town 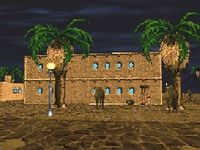 Deliver the goods to the contact's home

"Okay then, your contact is a (contact's description), about what you'd expect. Supposed to be hanging around a nook they call (building) in (town). Now, (contact's name) has picked up some loot out there in (town) and wants you to bring it back to us. If you think you can handle all that, we'll expect you back here in (time limit) days with no excuses. All right then. Go."

"No? How much more simple you want yer assignment to be? Stand still while I slap you with eels? And that might not be such a bad idea! (Oath), what a waste." 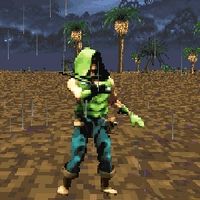 Other thieves don't like you cutting in on their territory

Smuggle a gem back to the Thieves Guild

Travel to the town the quest giver sent you to. Take care, as you may encounter resistance along the way from rival thieves or guards seeking to take the weapon from you. After you land a successful hit, your first opponent will shout one of the following:

"Halt in the name of (random name)! I know you are smuggling weapons. Surrender or face the consequences."

"I heard you were smuggling (weapon)s for the Thieves Guild. Give them to me and I will spare your life."

"We want those (weapon)s. Turn them over and we won't rough you up too bad."

If you surrender the weapon, you are told:

"Now get out of here before you get hurt."

Naturally, if you hand it over you will fail the quest. If you refuse the offer, escape or fight your way to your destination. Find the correct building, enter and speak to your contact, who greets you by saying:

Having traded the weapon for a gem, return to the quest giver to collect your sparse reward.

When giving the loot to the quest giver he will be pleased and say:

If you do not bring the weapon to your contact in time, meaning you keep it for yourself, you will lose reputation according to the table below.

If you give the weapon to the guards, you will lose reputation according to the table below.

If you don't bring the gem back to the quest giver in time, you will lose reputation according to the table above.