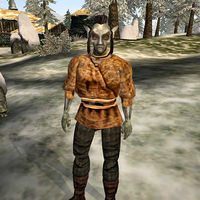 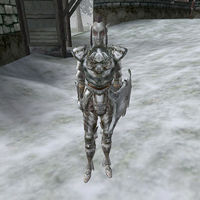 Garnas Uvalen is a Dunmer commoner located on the east side of Raven Rock. He can be recruited as a guard in the quest, Hiring Guards. It'll take a few days to get him equipped and trained.

Initially, Garnas wears a common shirt with matching pants and shoes. After he's made a guard, he will be wearing a set of steel armor including the cuirass, greaves, both pauldrons, both gauntlets, boots and shield. He will also be wielding a silver longsword. Aside from his natural resistance to fire and the sanctuary provided by his ancestors, he knows no spells.

"So you're looking for volunteers? I've never been one to turn down an offer. It's gotten me this far, and maybe now I can go even farther. Sure, I'll accept."
"I've already accepted the opportunity, %PCName."