The UESPWiki – Your source for The Elder Scrolls since 1995
< Blades: Items: Armor: Helmets / Special Items
Jump to: navigation, search 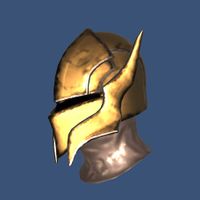 The Golden Champion's Helm is a unique helmet awarded to players who ranked within the top 100 on the Arena Leaderboards prior to their reset at the end of early access.

This Blades-related article is a stub. You can help by expanding it.
Retrieved from "https://en.uesp.net/w/index.php?title=Blades:Golden_Champion%27s_Helm&oldid=2184528"
Categories:
Hidden categories: