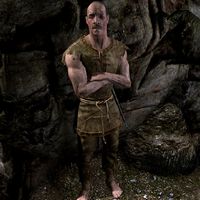 Grisvar the Unlucky is a Nord thief who has been locked up in Cidhna Mine for life after committing many crimes. He carries two shivs. In exchange for a bottle of skooma, he will give you a shiv.

If you decide to accept Madanach's help he will order you to kill Grisvar as a "show of loyalty".

"I got locked up one too many times. Now I'm in for life."
"Jarl decided I was too much of a problem. Threw me in here with the Forsworn."
"I swear, if I ever get out of here, I'm giving up thieving. Really."

After speaking to Borkul the Beast:

I need a shiv.
"Ah, you want protection? I can get you what you need. Maybe you can do something for me, first? Duach has a bottle of Skooma. Finest distilled Moon Sugar. I'm shaking just thinking about it."

I'll get it for you.
"Thank you, friend. Don't worry. I'll have that shiv ready for you."

I don't think so.
"All right, but if you change your mind. Not like we're going anywhere."

If you already have skooma:

I already have some skooma.
"Ah, you're a clever one aren't you? Now, here's your shiv. Promise you won't ever use it on me, okay?"

Once you return with skooma:

I have your skooma.
"Here's your shiv. Promise you won't ever use it on me, okay?"

When spoken to after Madanach asks you to kill Grisvar:

Madanach says hello.
"What? No. No don't kill me. Please!"