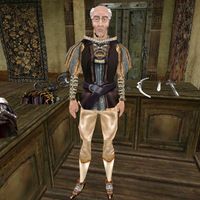 Verick Gemain is a Breton trader who owns a shop in Caldera, next to Shenk's Shovel, where he sells an impressive array of general goods. Rumor has it he may know a thing or two about a certain sculptor in town...

He wears some expensive pants, an extravagant belt, along with matching shoes and a shirt. He carries two Warhammers of Wounds. Aside from his natural bonus and resistance to magicka, and his ability to shield himself for short periods, he knows the following spells: Reflect, Sotha's Mirror, Weak Spelldrinker, Vivec's Feast, and Spell Absorption.