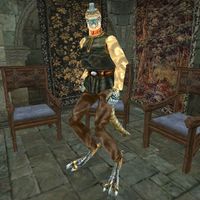 Skink-in-Tree's-Shade is an Argonian sorcerer who resides in the Mage's Guild at Wolverine Hall near Sadrith Mora. He is the primary quest giver there and can allow you to join the guild.

He wears a common shirt with matching pants, and he wields a glass dagger. He also carries a guide to Sadrith Mora and up to 4 random wizardry-related books. Like all Argonians, he is immune to poison, has a resistance to disease, and can breathe underwater. Aside from that, he knows: Burden of Sin, Crushing Burden, Crushing Burden of Sin, Cruel Weary, Great Feather, Summon Greater Bonewalker, Summon Scamp, Wizard Rend, Commanding Touch, Reflect, Weak Spelldrinker, Wild Spelldrinker, Slowfall, and Summon Skeletal Minion.

This humble Argonian holds his difficult Mages Guild branch with grace and diplomacy. Of all Guild leaders he also seems the most concerned about Vvardenfell's contemporary events. Dark afflictions such as vampirism and ash creatures seem to be his chosen field of academic study. Despite being a Mages Guild member, he is somewhat respected by House Telvanni, having been noted by them as being "almost as sage and learned as Telvanni aspirants five times his age". He is also rumored to carry his anti-slavery politics a little too far, much farther than Imperial law would normally allow.

Skink-in-Tree's-Shade is the Master Trainer for Speechcraft and also provides medium training in Mysticism and Enchant, and is the second-highest enchant after the hostile master trainer, Qorwynn. However, you must be at least a Magician in the Mages Guild to receive Skink's services.

If you ask Skink-in-Tree's-Shade about duties before you have finished Edwinna Elbert's second duty, he says that he does not have any for you yet:

So return to Skink after you have finished that quest to hear what he needs your help with by then:

If you ask him about Tenyeminwe again before you actually escort her to the Telvanni docks, he says:

If Tenyeminwe dies before she can make it to the Telvanni docks, Skink-in-Tree's-Shade will be upset with you:

He will also refuse to give you any more quests if that happens. However, if Tenyeminwe does make it to the docks, he will be pleased with your efforts and say:

If you ask him about the Altmeri scholar again after the completion of this quest, he will say:

As soon as you finish Skink-in-Tree's-Shade's first task, you can receive the second one that he has to offer to you:

Return to Skink with the book in your inventory to finish the quest:

If you mention the book again after you have given a copy of it to him, he says:

Meeting with a Wise Woman[edit]

For his third duty, Skink-in-Tree's-Shade wants you to arrange a meeting with a Wise Woman for him:

Return to Skink-in-Tree's-Shade after you have arranged a meeting for him to complete the quest:

After you have arranged a meeting with Minabibi for Skink-in-Tree's-Shade, you can immediately receive your next duty from him:

If you speak with Skink again before you deal with Telura Ulver, he reacts as follows:

Return to Skink once Telura Ulver is dead to finish the quest and receive his thanks:

If you mention the topic of necromancy again after you have finished this quest, Skink says:

Soul of an Ash Ghoul[edit]

If you speak with Skink-in-Tree's-Shade again after you have both killed Telura Ulver and have at least become a Wizard in the Mages Guild, he will be willing to give you yet another duty:

After he has given you this task, Skink-in-Tree's-Shade has the following things to say:

Mentioning the topic "ash ghoul" again after this quest has been completed elicits the following response:

Immediately after you have brought him the soul of an Ash Ghoul, you can receive the next duty that Skink-in-Tree's-Shade has to offer to you:

Return to Skink-in-Tree's-Shade after you have found the papers to turn them in and finish the quest:

Interestingly, Skink-in-Tree's-Shade's reaction to your giving the papers to him is somewhat different if you are a vampire:

Finally, if you mention the papers again after you have completed this quest, Skink-in-Tree's-Shade will say:

For one of Edwinna Elbert's duties, you need to travel to Sadrith Mora to retrieve a potion that Skink promised to make for her some time ago:

If you speak with him again before bringing the potion to Edwinna, he says:

After the quest, he has the following to say about the potion:

During this quest, you can ask Skink about Telvanni spies, in which case he helpfully points you in the right direction:

If you ask Skink-in-Tree's-Shade for more duties after you have finished the quest Galur Rithari's Papers but before you have become a Master Wizard in the Mages Guild, he will react as follows:

Once you have risen to the rank of Master Wizard, Skink will have one final request for you:

If you speak with Skink-in-Tree's-Shade again after you have completed this quest (and have thus become the Arch-Mage of the Mages Guild in Vvardenfell), he will say: