The UESPWiki – Your source for The Elder Scrolls since 1995
< Morrowind: People(Redirected from Morrowind:General Darius)
Jump to: navigation, search 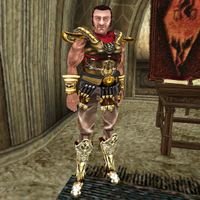 Darius is an Imperial Legion general, specifically the leader of the Deathshead Legion in Gnisis. He can be found on the lower floor of the Madach Tradehouse. Joining the Imperial Legion can only be done through him, as only his garrison is accepting new recruits. He will provide an Imperial Chain Cuirass upon recruitment.

Darius wears a set of Imperial templar armor (excluding the helmet and greaves) and common pants. He carries an Imperial broadsword, up to 50 gold, and a key to his chest. Aside from his natural charm and ability to absorb fatigue from others, he knows no spells.