I am a graphic designer by trade and am well versed in traditional, commercial and web design. I have a great affinity for usability and standards compliance, so I figure this is a great community to get involved in and help improve. I am an avid fan of Morrowind and the universe Bethesda has created; its amazing and unique in my eyes. I've been playing Morrowind since it came out on the XBox and count myself pretty knowledgeable on all things Morrowind. I've read The Morrowind Prophecies cover to cover and have spent a great deal of time in game. I am not as knowledgeable on Tribunal or Bloodmoon, but I have played through each at least once. I've recently begun playing Oblivion, but I don't know much about it to say the least. Any tips that aren't already posted on this wiki would be appreciated.

I started with Morrowind on the XBox when it came out, and still own my copy. I also purchase the GotYE for XBox when it came out. After looking for online help with the game, I discovered "mods" and I was pulled away from the XBox forever. I quickly purchased the GotYE for PC and went through a period of heavy modding. Ultimately, I've reverted to using only the official plugins so my gaming experience isn't altered too much from standard players on all platforms. I also purchased Oblivion when it came out, but my PC crashed shortly after (Correlation...?). I've migrated to the Mac and continue to play both, but plan on reinvesting in a PC as soon as possible.

As a designer, I like making things beautiful. If you need a graphic or an image fixed, let me know and I can do it. I also love maps and working with them so if there is a project out there involving this, I'd be interested. I'm a huge Morrowind fanatic, trying to become an Oblivion fanatic. I also like the flora and fauna of Morrowind. I have a pretty good understanding of biology, geography and weather, and I like to think about how these things would really look or really behave if they were real. I'd be happy to discuss my theories with anyone who's interested. In my spare time I also like to draw creatures how I would expect them to be in real life. I may put some pics in here from time to time.

I am a huge fanatic of Frank Herbert's Dune Series and if you are too, you've probably heard of Pardot Kynes, or his son, Liet. They were the Imperial Planetologists to Arrakis and their mission was to understand the ecology of Dune. As I mentioned in my interests, I have a fascination for the same things, and I seek to understand the inner workings of the world of Tamriel and share my knowledge with others. 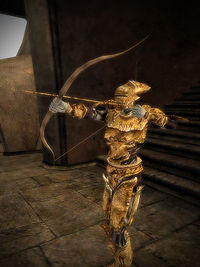