The UESPWiki – Your source for The Elder Scrolls since 1995
< UESPWiki: Policies and Guidelines
Jump to: navigation, search 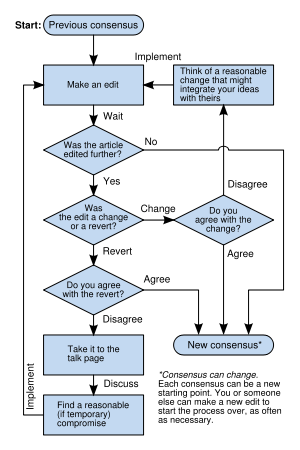 A flowchart showing a great way to approach consensus.

This page describes the fundamental importance of consensus for making decisions on the wiki, and provides recommendations on when and how to start a discussion about a proposed change.

One of the most important principles of the UESPWiki is that all decisions are made based on the consensus of the community. Discussions (either on the talk page of the page in question, or on the Community Portal for more general issues) are encouraged as a means for editors to exchange ideas about possible changes to the content or format of the wiki. All members of the community are welcome to contribute to these discussions.

On the other hand, the intent is not to make it prohibitively difficult to implement changes to the wiki. Most edits are not controversial and do not need to be discussed ahead of time. Even if a change does turn out to be controversial, the wiki software makes it very easy to revert a page to a previous version. In other words, editors should not feel paralyzed by an expectation that they need approval of the community before making any edits.

In some cases, a discussion should be started and consensus established before any changes are made. Unambiguous, definitive guidelines for what is likely to be controversial, or what is difficult to undo, are difficult to provide. Therefore, this is a decision that needs to be made on a case-by-case basis by each editor based on their best judgement. Some cases where consensus is generally needed beforehand are:

When initiating a discussion some recommendations are:

If you think that a change does not meet the above criteria (or if in doubt), go ahead and make the change. However, all edits are still subject to consensus approval; consensus can be established after a change is first made.

If you notice another editor make a change that you feel is controversial, you can start a discussion about the change. It is best to assume that the original editor did not think that it would be a controversial edit. In most cases, deleting or reverting is not appropriate until after the issue has been discussed.

The only cases where content should be deleted without a discussion is in cases where content is clearly inappropriate (for example, it violates UESP policy or guidelines, or is contrary to already established consensus). The reasons for the deletion should be clearly stated in the edit summary.

A change that is left unedited or is not otherwise commented upon is assumed to implicitly have the community's consent. On the other hand, any issue can be reopened for discussion, even if a consensus was previously reached, if an editor feels that there is a need (for example, new circumstances).

In these discussions, all editors' opinions should be given equal weight. In particular, administrators do not have inherently greater authority than other editors. Because of their greater experience with the UESPWiki, administrators may have more knowledge of how content is currently organized on the site, or be able to refer to similar examples on other wiki pages. Therefore, administrators (and experienced editors) may be able to provide more support for their position. Their reasoning, rather than their status, may therefore cause their opinion to influence a discussion.

When participating in a discussion about a proposed change it is recommended that any editor:

If everyone involved in a discussion is agreeable, the Discord server can be used to discuss in real time, and often can allow a compromise to be reached more quickly. However, in many cases Discord is not appropriate (in particular if one member of the discussion would be excluded), and therefore should not be counted on. Also, any compromise that is reached should be summarized on the talk page for the benefit of other UESP editors.