The UESPWiki – Your source for The Elder Scrolls since 1995
< Tribunal: Creatures
Jump to: navigation, search

Frightening creatures. Possibly even more intelligent than their goblin handlers. You might hear them referred to as "sludgepuppies," but don't let that name fool you. They're strong, smart, and often well-trained creatures. The goblins use them on patrols to hunt down their victims. - Fedris Hler 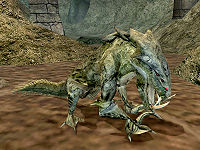 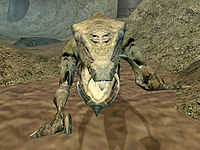 Description: A dog-like creature, more reptile than dog, is often kept by goblins for patrolling, and attacks on sight.
Found: In the sewers of Mournhold accompanied by goblins.
Drops: Durzog Meat
Resistant against: -
Disease: Some are known to spread the Rotbone disease.

Description: The stronger specimen of these dog-reptile creatures are often raised by goblins and trained for battle. They are sturdier and even more vicious than the wild ones.
Found: Next to goblin handlers in the underground of Mournhold.
Drops: Durzog Meat
Resistant against: -
Disease: -