Speak to Sybille Stentor in the Blue Palace throne room and ask what her problem is. She will tell you about a local nest of vampires which you should wipe out. 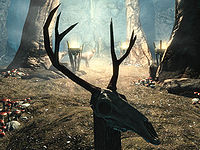 The first area of Pinemoon Cave

Make your way to Pinemoon Cave, west of Solitude. It is a very small cave with only four chambers, and an assortment of vampires and wolves. You only need to kill the Master Vampire to complete the quest. He can be found in the third chamber, a large room with pews facing an altar. The Master Vampire can be found on the altar area. However, he has two companions who will also attack if you are detected. They will reanimate a corpse of a Nord which lies on a table in the southern part of the chamber. 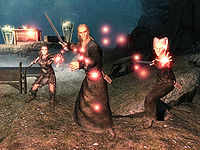 If you do clear out the cave, there is a locked chest next to the altar. Also do not forget the fourth chamber, the sleeping quarters, which contains the Illusion skill book Incident at Necrom and another chest.

Exit the way you came in and return to Sybille Stentor for your reward, which is jewelry and a single free skill boost in Illusion.